You are here: Home1 / Blog2 / Can You Use Your Shoulder in Soccer? Find Your Answer Here!

These are two main ways that the shoulder can be used during a soccer game.

Is Using Your Shoulder Handball?

Have a look at this short video below of Portuguese soccer player Cristiano Ronaldo using his shoulder to pass the ball during a soccer game.

Using your shoulder in soccer is not a handball offense and is therefore permitted within the rules. If a player clearly touches the ball with their shoulder and not their arm, the referee will allow play to continue.

Although it is uncommon to see a player make a pass this way or even touch the ball with their shoulder there is nothing within the laws of soccer that restrict a player from doing this. And, as you can see above, it does occasionally take place.

The reason for people’s confusion over whether a player can touch the ball with their shoulder in soccer is because of the restriction on touching the ball with either the hand or arm.

Can a Defender Score in Soccer? 5 Defenders Who Did

Most people are unclear on where exactly a person’s arm ends and the shoulder begins and because of this many people are concerned that touching the ball with the shoulder is considered to be using the arm.

During a soccer game, it is left up to the referee to use their judgment and decide. When the ball hits the player in this area the referee will determine if they believe the ball has made contact with a player’s shoulder or the upper arm. As the referee is in charge of the game, the players and spectators must accept the referee’s decision.

The official laws of the game of soccer are governed by the International Football Association Board (IFAB). Every professional soccer game around the world abides by these rules.

In these rules, there are a number of references to not using the hand or arm. In fact, this is what the rules of soccer say about not a player not using their hand or arm during a game:

In soccer it is an offense if a player:

As you can see this list of offenses only refers to the hand or arm.

There is nowhere in the rules that restrict a player from using their shoulder to pass and as you saw in the video above it can be done and the referee will decide if the shoulder was used legally.

Can You Score With Your Shoulder? 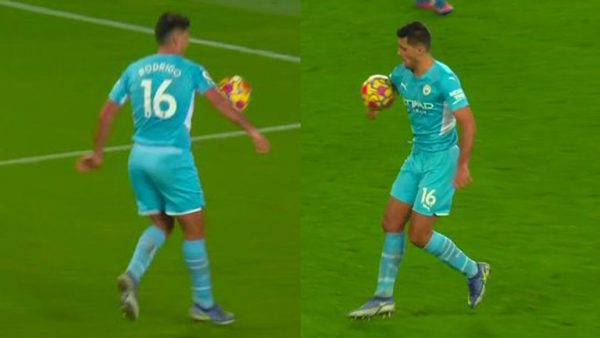 can you use your shoulder in soccer to score?

Now you know it is permitted in soccer to touch the ball and pass with your shoulder you may be considering if a player can score with their shoulder.

The answer is yes!

In a game of soccer, a player is allowed to score with their shoulder. The rules of the game of soccer permit this as long as the ball does not also touch the arm of the player.

Have a look at this video below showing Mario Balotelli scoring with his shoulder for Manchester City.

As you can see the player makes sure that only his shoulder touches the ball and not any of his arm. If his arm had touched the ball the goal would have been disallowed by the referee.

As you may have noticed it is not common to see a player scoring with their shoulder during a soccer game. The reason for this is that it is a risky tactic to use and there are a variety of things that could go wrong.

It can be hard to accurately direct the soccer ball with your shoulder. It is a bony part of your body that the ball can fly off in a different direction to what you intended. It is also hard to get a lot of power behind the attempt at goal and unless you are very near the goal, or the ball hits you at considerable speed, the goalie will probably be able to stop the shot.

However none of these reasons make it an illegal move and if you get the opportunity to try it in a game, why not give it a go!

Is Using Your Shoulder a Foul?

How to Beat a Defender in Soccer through Tricks?

The answer to this question is a little more complicated as it relies on the judgment of the referee.

A player can use their shoulder in soccer to make contact with an opponent, such as with a shoulder charge, as long as it is done in a manner that is not considered dangerous, careless, reckless, or using excessive force. Fair contact is acceptable.

As I mentioned before, the referee is in charge of the game and they will use their judgment to decide on the outcome of any action throughout the game.

To help the referee decide, the rules of soccer give specific guidelines on what type of force is considered dangerous, careless, reckless, or excessive.

and using excessive force is:

As long as the use of the shoulder doesn’t fall into any of these categories then a player is permitted to use their shoulder to tackle or make contact with an opponent.

Because of this, a shoulder-to-shoulder challenge in soccer is not a foul as long as it is done in a manner that is not considered dangerous, careless, reckless, or using excessive force. Going shoulder to shoulder with an opponent in a dangerous, reckless, or excessive manner may get a player cautioned or sent off.

I hope you now feel you understand how the shoulder can be used in soccer and when it cannot be used. On Fermifootball you will have a chance to update all rules and news about the football game.

Yellow Card in Soccer: A Complete Guide to What It Means